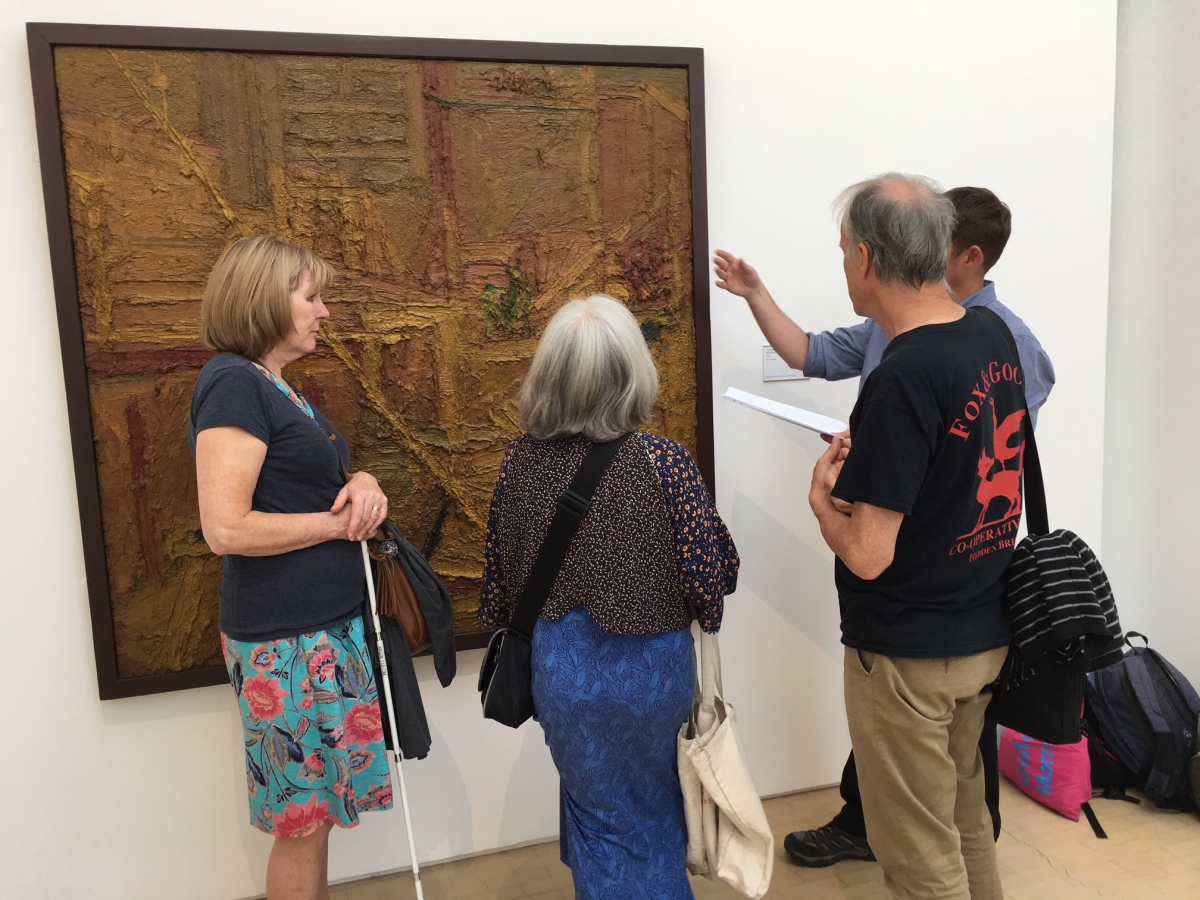 Brian Lewis, Eleanor Snare, Emma Bolland (2018), Matthew Bellwood, Peadar O’Dea and Terry Simpson were the writers who rose to the challenge of creating and reading a description for my event on 19 July. Their varied styles and approaches to the task resulted in a wonderful selection of descriptions. They engaged the audience’s emotions and intellect with witty, clever and moving readings, which included stories, a letter and a poem. Writers not only described the artworks, but included political and historical context, information about the artist’s life and work, and their own interpretations.

The artworks that the writers chose to describe were: 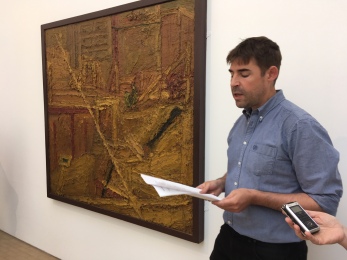 Brian Lewis’s detailed examination of an abstract work showed how much was represented in this painting of the pulling down a furniture store in London: Maples Demolition, Euston Road. Through the context of the artist’s body of work and the post-war period, we discovered how the layering of thickly applied oil paint reflected the subject matter and the period. Brian’s use of directional navigation to guide us round the picture was appropriate and effective. The tactile qualities of this work were not lost on us, even though we were unable to touch. 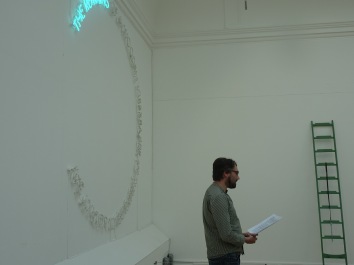 Meanwhile, Matthew Bellwood told a fascinating tale of Botany Bay and its links to Leeds. A contemporary work in neon, quite minimal and stark, the layers of The Remains were revealed through research – into the artist’s other work and previous exhibitions, the woollen trade and industry of Leeds, the meaning of words and names, Captain Cook’s voyages, and the erasing of Aboriginal culture in Australia. A complex description arose from a deceptively simple installation. We made discoveries of our own, centuries after Discovery sailed. 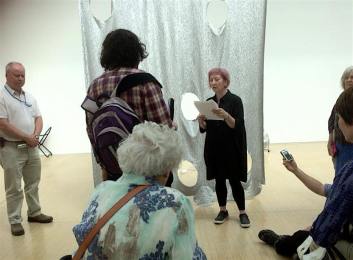 In the same gallery, showing contemporary works in the collection, Emma Bolland found her route in to her description of Movie through the letter form. This set up a conceptual dialogue with the visitor. Her description was an interrogation of what it means to see or to look at things differently, for gallery visitors to have different perceptions of artworks – from the artist, from other visitors and from curators. In addition, the bright daylight in the gallery all but obscured the moving image element of this installation, a fact that Emma wove in to her description, musing on what is and isn’t visible. 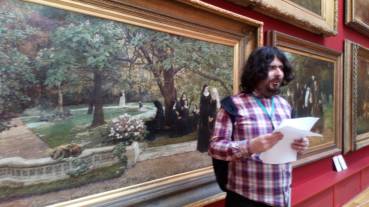 Peadar O’Dea, with his story of an agnostic Mother Superior, challenged by a novice in The Convent Garden, had introduced disabled characters, “… because I just like to write about disabled characters. I thought: Why not?” And why not introduce a fleeting bluebird, if it improves the plot? Playing around with timelines and describing the poses of the characters “as if caught in a painting” was inventive, introducing humour and playfulness. The painting was originally created to prompt viewers to make up stories. The stories we tell today may be very different from those imagined by the artist. 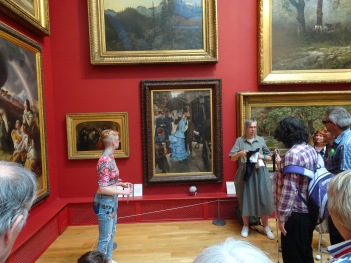 One of the research participants had suggested that poetry is a good way to bring paintings to life. That was certainly the case with Eleanor Snare’s poem which accompanied The Bridesmaid. She wrote from the point of view of a messenger boy who appears in the foreground of the painting, chosen because he is the nearest person to the audience. Her beautiful poem described the scene with longing and wonder. This proved that a good description need not include every last detail in a picture – that would be boring and difficult to follow. Instead, Eleanor cleverly revealed key details through the observations of the boy.

Terry Simpson chose the mammoth Victorian painting Retribution. Such a significant and well-known (loved?) presence in the gallery seemed an appropriate ending to the event. It’s certainly a controversial picture, painted at the height of the British Empire.
Heroic Britannia is 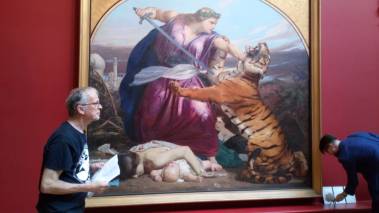 shown exacting revenge on the Indian tiger. The painting in fact represents a shameful series of events provoked by Britain’s savage treatment of the people of India. Terry was able to put this into context and give a contemporary interpretation. Conflicting feelings arose from this work: condemning the injustice of empire while admiring the representation of a strong woman, “A Victorian super-heroine”.

In the discussions that followed the readings, participants were enthusiastic about the descriptions, which they felt had been effective in bringing the artworks to life and awakening the imagination. People picked out phrases or sentences that they particularly liked, or styles that they felt were evocative of a mood, scenario or historic period. Reading the drafts of the descriptions before the event, I had been impressed with the high quality of the descriptions, as well as the varied styles.